This site provides step-by-step instructions for faculty and staff on how to use instructional technology such as Blackboard and NUI Galway digitally enhanced classrooms.

How to exclude a match from a Turnitin Originality Report

Excluding a match from a Turnitin Originality Report

Occasionally, a match will occur with another document that you simply want to exclude, for some reason. It could be that the student has submitted a draft of the paper before, which is skewing results, or that the submitted paper has been published (in part) on the web previously.

You cannot remove an item from the Turnitin database, once it has been submitted, but you can exclude a source from the originality report – thereby re-generating the report to show other, previously masked, matches.

Excluding the Match from the Originality Report

1.     From the control panel, under Course Tools, click on Turnitin Assignments and select the current assignment. Find the originality report (often at the top of the list) for which you want to exclude a source.

2.     Open the originality report by clicking on the coloured box. Usually the top match is the one that you want to exclude.

3.     Hover the cursor over the match you want to exclude; you should see a small right- arrow appear, offering to show the Match Breakdown. 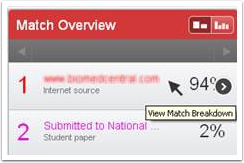 Click on this little right-arrow and the display will change to indicate any smaller matches, hidden by the large match.

4.     You should also see a large grey button “Select Sources to be Excluded”. Click this to proceed. 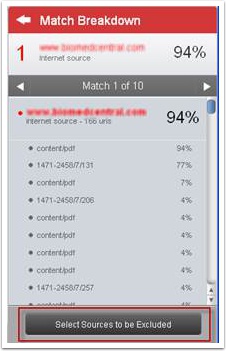 5.     Now you will see a list of check boxes that can be used to indicate any matches that should be disregarded. To exclude the entire source, check the box at the top of the list, as in the following screen shot. 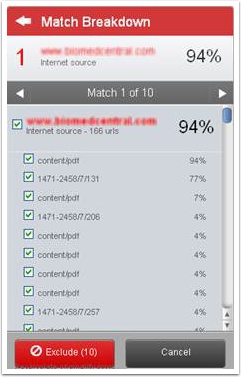 6.     Click the red Exclude button. A new originality report will be generated, excluding the selected piece of work from the matches, and giving a better picture of matching text within the document. The overall similarity index (in this case 94%) is likely to decrease.

7.     This process can be repeated for as many source exclusions as may be necessary.

8.     Note that the student (if he/she can view his/her own originality report) cannot exclude matches. Therefore you should warn the student that, by allowing re-submission, the percentage of matched text will initially be very high. Once you have excluded the source, the student will be able to see the re-calculated originality report.

Academic staff who are considering using Turnitin with their students are advised to contact turnitin@nuigalway.ie, or the appropriate Plagiarism Advisor for the School, for advice and support.